PoE is a technology which enables electrical power to pass over Ethernet cable at distances up to 100m. It is developed to reduce the cost of network planning, cabling, and installation. PoE is primarily used for low-powered terminal devices, typically VoIP phones, IP cameras, and wireless access points, but it can also provide a redundant power supply for switches to increase the network’s reliability. Until recently, the PoE switches are commonly found in industrial Ethernet network deployments. 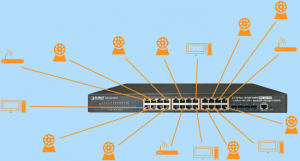 In 2009, IEEE introduced the higher powered 802.3at standard, which is known as PoE+. The standard supports 30 watts of power, but similar to the 802.3af standard, power dissipation causes powered devices to receive slightly lower amounts of power, specifically 25.5 watts of power. The IEEE Committee is now developing a new standard (IEEE802.3bt) which will power up 70+ Watt loads.

As PoE changes to meet growing technology and application requirements, it is being classified by classes. PoE classes ensure efficient power distribution by specifying the amount of power that a PD will require. PDs that require less power than the lowest PoE standard to receive a low-ranking power classification and allows the PSE to allocate the surplus amount of power to other connected devices. PoE systems provide high reliability, convenience, and low cost. The available 25 watts per port is sufficient to power many common applications. Since PoE systems are classified as low-power systems, they need not be installed nor maintained by licensed personnel.

A PoE switch is a dedicated device that contains multiple Ethernet ports to provide power and network communications to IP cameras. At the same time, it is a kind of PSEs to allocate power to the desired amount of connected powered devices. For example, S1400-24T4F gigabit switch is an 802.3af PoE compliant PSE that boasts a total PoE power budget of 400 watts.

There is 25% redundant power peak, which can fully allocate IEEE802.3af PD devices, and half allocate the IEEE802.3at PD devices, such as IP cameras, VoIP phones or wireless access points. It can automatically adjust energy consumption according to the ports’ actual flow, dynamically sense idle periods between traffic bursts and quickly switch the interfaces into a low power idle mode, in result to save 30% power dissipation.

By the way, when you utilize PoE managed switches, installation of controllers and access points is greatly simplified. You won’t need to provide separate power cables or install plugs near Wi-Fi locations. You’d simply run your Cat5e or Cat6 cable from your hotspot to your switch. All in all, PoE switch is the best option for SMB or entry-level enterprise solution which demands industrial surveillance, IP phone, IP camera or wireless applications.

PoE switch provides the availability of critical business applications, protects the sensitive information, and optimizes the network bandwidth to deliver information and applications more effectively. It is the best option for the SMB network. Before ordering your PoE switch, you should consider what your goals are for the network. In many cases, future-proofing with a better PoE switch may actually be a much better investment. For more information about PoE switch, welcome to visit www.fs.com.

Can a Single-Wavelength transmit at 600Gbps?