The technology is continually evolving along with the demand for consistent, seamless delivery and accessibility to internet and content-loaded application. From the old 56 kbps crawl of dial-up to the early 1 Mbps copper connections and all the way to the existing popular 1 Gbqs, 10 Gbqs/40 Gbqs fiber optic connections, we’ve gone through a drastic improvement to maintain a stronger signal, a better connection, a faster speed. It seems that the intricacies of the internet can get complicated, so how do you draw the line with your internet consumption and speed demands? So in this blog post, we explain how fiber optic works, why cause the boom in fiber optic speed and how fast fiber optic internet can be.

How Does a Fiber Glass Function on the Internet?

We know that fiber optic cable works like a bridge between the consumer and internet supplier. But how does this process actually work? To put it simply, fiber cable works by sending data as pulses of light through a glass fiber. At one end of the optical fiber, a laser or LED transmits data as light. At the other end of the fiber, the light will be converted back to the data by the light-sensitive receptors.

If the above explanation is not clear to you, then here comes the more vivid description; Fiber optic cables consist of strands of glass fibers. These glass fibers containing a core part and cladding part are wrapped by a protective jacket called coating. Owing to the total internal reflection, light can go from one end of the core to the other end without ever changing its wavelength. 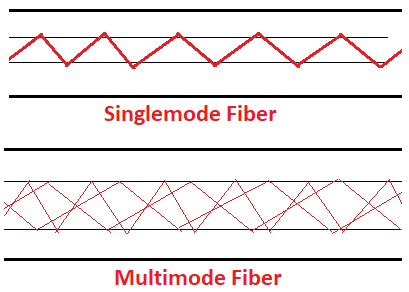 Single-mode and multimode fibers are the two broad categories of optical fibers having different core diameters that can affect how light can travel through the fiber. In a single-mode fiber optic system, there is only one pathway or mode that light can travel along. While in multimode fiber optic system, as seen in the below image, there are multiple pathways just like a circus funhouse with beams of light traveling along a variety of pathways through the core.

The advent of WDM (wavelength division multiplexing) in the mid-2000s as a great breakthrough in fiber optics as it allows multiple channels to be carried at the same time on a single fiber optic cable. There are all together CWDM and DWDM systems, CWDM or course WDM is the initial implementation that allows 4 and 8 wavelengths, such as the Ethernet LX-4 standard which allowed a cable to carry four 3.125 Gbit/s data channels, resulting in 10Gbit/s aggregate.

In DWDM (Dense WDM) system, even though it is much more expensive, it can handle up to 160 data channels expanding basic a 10 Gbit/s system over a single fiber pair to over 1.6 Tbit/s.

In terms of the new concept—dark fiber, it represents the unused cable laid in the network as space capacity, carrying high amounts of data at high speeds over hundreds of miles. Simply put, with DWDM, dark fiber network can easily increase bandwidth and allow more data to be sent via optical fibers. And as the price reduces, dark fibers are gradually becoming more popular than ever.

How Do You Find out What Speed You Need?

This seems to be a noob question. As you can simply use the speed testing websites to discover the speed of your internet connection. And tracking the aspects of your internet use can give a better idea of what speed you have and the speed that is optimal for you. What I want to express here are the common mistakes you will make.

It is not always the ISP’s fault if your speeds are slower than what you expect. Several factors might have a great impact on the accuracy of speeds. For example, the types of hardware you have, the age/types of the line you have, and how busy the internet is at all time.

To find what speed you need depends on several different elements. How you plan to use the Internet, how many devices you have in your home, and how fast you expect to be connected are just a few factors that influence which speed is right for you. For office network, network speed under gigabit Ethernet is not sufficient.

Remember, speed is a maximum level, not a guaranteed one. As your desire for a faster connection increases, be sure you have the Internet speed that will exceed your technological needs!

The Next Steps for Fiber Optics

The modern commercial fiber optic system enjoys it stay in the Gigabit Ethernet speed. But we can look forward to the increases in the range of gigabits per second down speed, perhaps even breaking into the terabit range, in the not so distant future.