The International Telecommunication Union (ITU), the United Nations specialized agency for information and communication technologies, inaugurated its new management team on 16 January 2019. A statement released by the Organization said that ITU has only one elected head to lead the team. The ITU Plenipotentiary Conference elects five top officials.

Though the inauguration was held on 16th January, all the five elected officials had taken up their duties on 1 January 2019. The new Management team will be the face of the organization for the next four years, that is up to 2023.

ITU-T is the international organization that specifies characteristics of active and passive components required for constructing a communication network. Most of the ITU-T recommendations are free to download. ITU-T aims to streamline and unify the parameters and characteristics of optical components so that the network builders can buy from multiple vendors. Compliance with ITU Recommendations ensures multi-vendor compatibility. This provides a competitive edge for network builders to select cost-effective, quality minded suppliers. 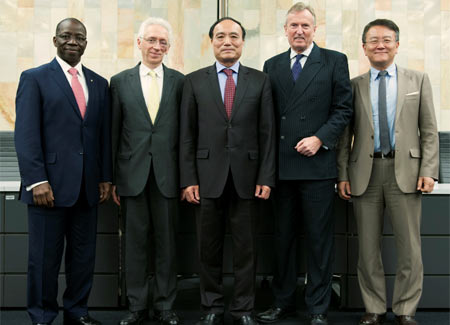 The Newly elected members are:

Mr Houlin Zhao of China was re-elected to the post of ITU Secretary-General.

Mr Malcolm Johnson of the United Kingdom was re-elected to the post of ITU Deputy Secretary-General.

Dr Chaesub Lee of the Republic of Korea was re-elected to the post of Director of ITU’s Telecommunication Standardization Bureau (TSB).

Mr Mario Maniewicz of Uruguay was elected to the post of Director of ITU’s Radiocommunication Bureau (BR).

Ms Doreen Bogdan-Martin of the United States was elected to the post of Director of ITU’s Telecommunication Development Bureau (BDT). Ms Bogdan-Martin is the first woman elected to an ITU leadership position in the Union’s 153-year history.

The ceremony was held in the International Telecommunication Union office, Popov Room, Geneva, Switzerland. Permanent Missions and Heads of UN Agencies based in Geneva and members of the press attended the event.